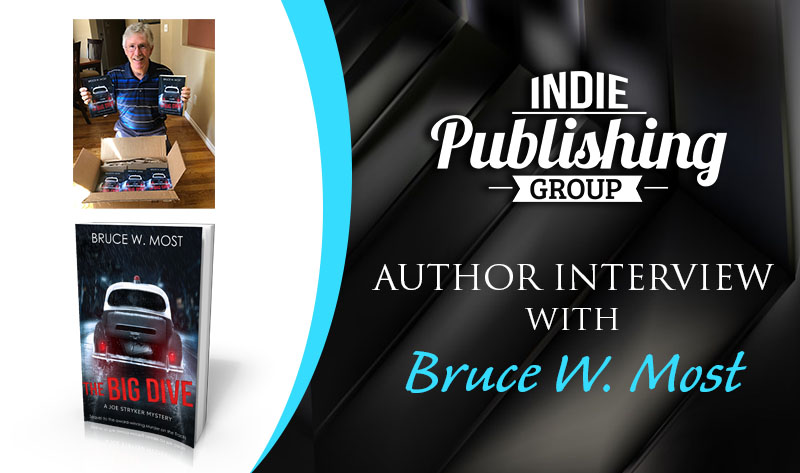 Author Interview with the talented author Bruce W. Most!

Hi, Bruce W. Most, welcome to the Indie Publishing Group website! Introduce yourself to us. Tell everyone who you are, where you’re from, what you enjoy doing, your hobbies and interests.

Thanks for having me. My name is Bruce Most and I like to murder people. Let me rephrase that. I like to murder characters in my mysteries. Some of them, anyway. The ones who deserve it. Some don’t deserve being murdered. I’m always sad about them, but unfortunately, innocents die too. Then I like to figure out whodunit, why, and bring them to justice. I can’t account for this obsession with murder.

I grew up in peaceful Iowa with loving parents and an uneventful childhood. I have lived in Denver, Colorado, for 45 years. Big cities have their fair share of crime, but still . . . When I’m not murdering characters, my wife and I travel domestically and internationally. I love photography, tennis, golf, and time with our two grandchildren. I’m a sane, happy man for being a murderer.

When did you start writing and why?

I started writing fiction in my late teens, and I have a box of rejection slips to prove it. Out of a need to earn a living, I chose the steady, well-paying profession of freelance writing. Okay, not a much wiser move than wanting to live off fiction. But I did fine with freelancing. I wrote magazine articles, ghosted a book, and produced and edited many other forms of nonfiction. I wrote my mystery novels on the side. A couple of bad ones before publishing my first two with the big traditional publisher St. Martin’s Press.

As for why I started writing, you got me. I grew up loving to read, but that alone doesn’t make one want to write. Something in my DNA, I guess. I love creating, dreaming up characters and plots (preferably in that order), putting words to paper, honing sentences, rewriting. I find nothing more rewarding than walking away after a good day of writing.

Which is your favorite book you have written and what gave you the idea for it?

I’m often asked what’s my favorite book and I never have an answer. Each book is special for its own reasons, like a child. I can say I feel my latest novel, The Big Dive, is my best-written book to date. It’s about a street cop in 1951 Denver, Joe Stryker, who made his debut three years ago in Murder on the Tracks. Joe’s partner is murdered almost in front of his eyes, the second time he’s lost a partner in the line of duty. That sparks major emotional trauma, imperils his already fragile marriage, and creates suspicion among his fellow officers.

Moreover, the murder poses two baffling whodunit questions: How did the killer pull off such a brazen murder and why was his partner—as honest a cop as they come—murdered while burglarizing a pawnshop? To protect his slain partner’s reputation—and save his own career—Joe is forced to conceal his investigation from everyone, including his wife. All while dodging a homicide detective hell-bent on pinning the crimes on Joe.

As to where the idea for the story came from, part of it was a natural outgrowth of the first novel: Joe’s struggling marriage, his penchant for investigating where he shouldn’t be, his quest for justice where no one else will. Two actual historical events also inspired me: a national scandal of corrupt Denver cops exposed in the early 1960s, and the shameful internment of Japanese-American citizens in relocation camps during World War II. These two historical strands play significantly in the plot.

How did you come up with the title for your book?

I won’t give away exactly where the title comes from, as it would reveal plot. But I can say it popped out at me from a quote in a 1961 Life magazine article about the Denver’s corrupt cops. My working title was Dark Riders, but that sounded like a 1880s Western.

Who helped you with the cover? Or did you design it yourself? What was your inspiration for your cover design?

The cover is a collaboration between myself and a cover designer who goes by Cheriefox, who did a wonderful job. The basic idea was mine. Because dirty cops are part of the story, I thought a cop car with a safe peeking out of the open trunk would convey that. (A safe really did fall out of the trunk of a police car in the Denver police scandal.) The style of the car and the single globe dome light also instantly tells the reader this novel is set in the 1940s or 50s.

What are some of the themes of your story?

As with all my mysteries, and most mysteries, it’s about justice, however compromised the results may be. My protagonist Joe Stryker struggles with balancing the conflict of justice and truth: finding justice for his murdered partner without exposing his partner’s secrets that are so tied into his murder. In this particular book, I also incorporate the terrible racial injustice America created in the Japanese-American relocation camps

Although not by design, I realized after several books that a running theme is detective characters who are fish out of water. Stryker is a street cop clandestinely performing the job of a homicide detective or PI. In my mystery Rope Burn, set in contemporary Wyoming ranch country, an ex-Baltimore street cop is in over his head after being hired as a stock detective to stop a rash of cattle thefts (and ultimately murders). Two of my novels follow a brash bail bond agent named Ruby Dark who must solve murders to save her business. But with all of them, a sense of justice drives them, even at risk to their careers—or life.

What’s your process when you sit down and decide to start writing a book and do you have a system?

I’m halfway between a pantser and a plotter. I do a fair amount of research and brainstorming plot and characters before starting. But I don’t detail scene by scene for the entire book. I need to stay flexible. One of my books started with only a vague idea of who my killer would be. About 100 pages in, I introduced a minor character into a scene and it suddenly struck me that the “minor” character was my killer, not my original vague idea.

Who are some of your favorite characters and why?

All my protagonists are “favorites,” but if I must pick one, I’ll pick Ruby Dark, the flamboyant, brash, sassy 50-year-old Denver bail bond agent. When I was drafting her first book, eventually published by St. Martin’s Press, I talked about her one night at the dinner table. My son said, “Dad, you’re talking about her as if she is real.” I guess that suggests how close she is to me.

A secondary character I get a kick out of is the newspaper reporter/photographer in my Joe Stryker novels. I patterned him after the famous New York City crime photographer Weegee, the sort of gruff, classic newshound of the day.

Who are some of your favorite authors?

Have you got anything you’re working on now?

My next book will be about a freelance writer who’s too busy with the rat race of life to investigate the mysterious death of a close friend. Mmmm, can’t imagine where I came up with that idea. I’m also writing short stories and brainstorming notes for two other novels.

If you could have any superpowers what would they be?

If you could travel to any location in the world, where would you go?

Antarctica is high on my list, and if I ever write a mystery set during the Vietnam war, I want to visit Vietnam.

Where do you hope to be in 5 years’ time?

At Indie Publishing Group, we understand that no two projects are the same. Some authors may prefer extra attention, or new authors may want help throughout the self-publishing process. That’s why we have developed our Platinum Concierge Publishing Package. The Platinum Concierge Publishing Package involves additional one-on-one assistance throughout the design and layout stage, uploading assistance, and even more fantastic bonuses. This package includes everything you need to get your manuscript uploaded and published: